Senior Heather Eller will continue her running career at Rochester University next year. Eller signed her National Letter of Intent just before Winter break. Eller was a four year member of the varsity Cross Country team — including a captain her Senior season. She recorded sub-20 times in both the pre-Regional and Regional competition and recorded

Heading into States, the girls Cross Country team is feeling pretty good about their chances at a State Title. While Petoskey won the Regional trophy with 39 points, Cadillac was a close second at 41 points — earning them a place in the State Finals this Friday. The Vikings have shown significant progress this season especially against

It was an exciting Monday night for the Cadillac Cross Country teams — not only did both the boys and girls teams qualify for the Regional finals but Junior Kendall Schopieray set a new school record for the Vikings. The pre-regional race took place at Benzie Central where the top four teams advance to Regional Finals on

The cross country team wrapped up their regular season on Tuesday at the Big North Conference finals. The girl’s team placed third in the BNC while the boy’s team placed fifth. On the girls’ side, Traverse City Central won the title with 37 points while Petoskey placed second with 51, Cadillac third at 76, Traverse City West fourth

The Cadillac girls cross country team took advantage of the beautiful Fall weather over the weekend, running to a first place finish in their division at the Bengals Fall Invitational. The Vikings scored 49 points to win their division while Forest Hills Central placed second with 56 points and Forest Hills Northern third at 75. Chloie Musta led Cadillac

Cadillac’s JV Cross Country teams traveled to Mancelona on Tuesday — placed third (boys) and fifth (girls) overall. On the boys’ side, Traverse City St. Francis won the event with 26 points, Kalkaska came in second with 66 points and the Vikings scored 78 points for third place. Nolan Nixon led the way with a

The Cadillac Cross Country team ran at Calvin College on Saturday in the Cougar Falcon Cross Country Invitational. The girls’ team placed second in their division — the race was broken into four separate divisions of ten teams each — scoring 69 points. Kendall Schopieray led the Vikings with a fifth-place finish in 19:45. Chloie Musta finished ninth

We have two different Viking face mask designs for sale in the athletic office. The cost is $8 for one or 2 for $15. They are 90% poly, 10% spandex – machine wash cold – with adjustable ear straps. *Update: We only have the full face “striped” design left – we have sold out of 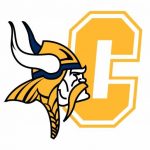 The Cadillac Cross Country team traveled to Ottawa Hills on Friday to compete in the invitational at Riverside Park. The race was divided into three sections of ten schools each — the girls team won their section while the boys placed ninth. For the girls, Chloie Musta finished second in 19:09 while Kendall Schopieray was