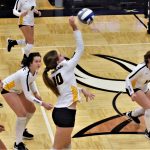 It’s their fifth straight conference title but the first time they haven’t had to share the trophy since 2016. The Cadillac varsity volleyball team brought home the BNC title on Wednesday night with a win over TC West. The Vikings swept the Trojans in three games 25-15, 25-16, 25-14. Macy Brown led Cadillac with 19 kills, 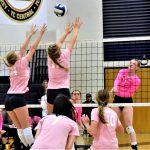 The varsity volleyball team swept Alpena on Wednesday while playing in front of a sea of pink. The Vikings hosted their annual Dig Pink event – raising money for breast cancer awareness. The win keeps the Vikings atop the Big North Conference standings at 8-0. Renee Brines led Cadillac with 22 assists, 13 digs, five kills and 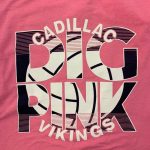 Join us on Wednesday, October 16th for our annual Dig Pink volleyball game! The Cadillac Vikings will be playing the Alpena Wildcats. T-shirts for the event can be purchased in the athletic office during school hours.  They are $10 each — you also get into the game for free if you wear your shirt on 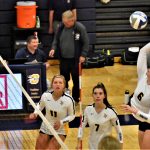 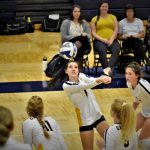 The varsity volleyball team remains undefeated in the Big North Conference after an easy sweep of Gaylord. The Vikings won 25-7, 25-11, 25-12 on Wednesday evening. Macy Brown paced the Vikings with 12 kills, 12 digs, six assists, and an ace. Renee Brines dished out 23 assists, nine kills, and nine digs while Chloe Comstock had four 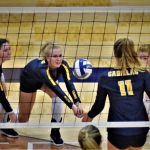 All three volleyball teams swept TC Central on Tuesday. Cadillac’s varsity team is now 4-0 in conference play after winning 26-24, 25-16, 25-21. The first set was a nail-biter as the Trojans held the lead most of the way, but the Vikings rallied back late to pull out the 26-24 win. That confidence pushed them 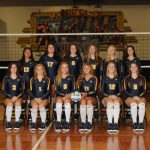 Cadillac volleyball took care of business after their three hour bus ride to Alpena on Wednesday. The Vikings swept the Wildcats 25-18, 25-19, 25-22 to remain undefeated in the conference.  Macy Brown led Cadillac with 25 kills, five blocks and eight digs while Renee Brines dished out 34 assists, 10 digs, five kills and three blocks. Maggie Neiss had 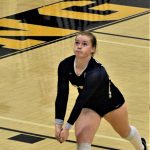 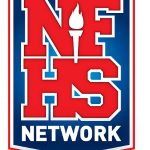 If you can’t make it to a game – there’s a new way to watch Cadillac Viking athletics this year! We’ve invested in new technology that will bring every game from our field and gym into your home LIVE. By subscribing to NFHS Network, you will get unlimited access to watch all Viking events that take place