14 seconds. That’s all it took for the Vikings to get on the board against Escanaba on Saturday. Cadillac made the five hour drive through the Upper Peninsula to play in the district semi-final game against the Eskymos. The Vikings came out victorious 35-12, allowing them to advance to the district finals for the first time since 2013.

Cadillac wasted no time taking it to the Eskymos, calling a trick play on the first possession of the game. QB Aden Gurden tossed it to Tipp Baker who then connected with Logan Wilde through the air for a 69 yard touchdown, Colin Hess kicked the PAT. Just three minutes later, Baker took off on a 55 yard TD run to give Cadillac a 14-0 lead. Escanaba added one of their own but Cadillac countered right back with a Carter Harsh touchdown to go up 21-6. Less than a minute into the second quarter, Gurden scored on a QB sneak. The Vikings held a 28-12 lead at halftime.

Scoring slowed in the second half, the Vikings held the Eskymos scoreless while adding one more of their own in the fourth quarter when Collin Johnston ran it in from nine yards out, Libbey Lloyd kicked the PAT.

Defensively, Baker and Johnston also led Cadillac with 10 tackles each. Noah Cochrane and Ryan Warner recorded four tackles apiece. Dan Gray and Alec Barczewski both had interceptions, Baker and Cochrane each forced a fumble, and Mike Miller recovered a fumble.

The Vikings travel to Sault Ste Marie on Saturday for the district championship, kick-off is at 2:00 pm.

We have playoff t-shirts available for $10 or sweatshirts for $20. All orders must be emailed to maddie.masten@cadillacschools.org by 2:00 pm on Tuesday, 11/5. All shirts are unisex sizes.. t-shirts run true to size, sweatshirts run slightly smaller. Youth medium and youth large are also available for purchase. Orders will be ready for pick-up in the athletic office between 8:00-3:00 on Friday, 11/8. 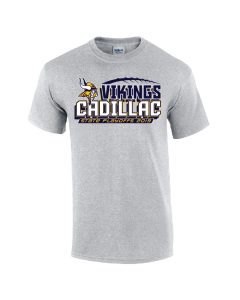