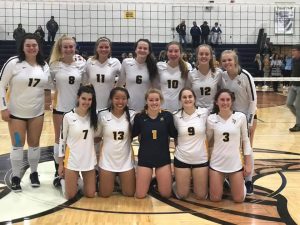 It’s their fifth straight conference title but the first time they haven’t had to share the trophy since 2016. The Cadillac varsity volleyball team brought home the BNC title on Wednesday night with a win over TC West. The Vikings swept the Trojans in three games 25-15, 25-16, 25-14.

The varsity team finishes their regular season on Saturday at Central Montcalm. Districts start next week – Cadillac has a bye the first round then will face off with the winner of Big Rapids/Ludington. That game will be played on Wednesday in Big Rapids at 7:00. The winner will advance to district finals, also at Big Rapids, on Thursday at 6:00.