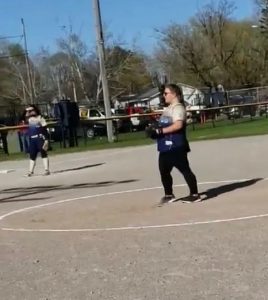 The varsity softball team picked up two conference wins on Wednesday against the Gaylord Blue Devils. The Vikings won 6-3, 6-3 as they also celebrated Parent’s Night.

Ashlyn Lundquist pitched game one for the Vikings, allowing three earned runs on six hits while striking out four. Offensively, Melodee Eastman led the way with three hits, Lundquist a double with two RBI’s, and Autumn Fosmore a hit and RBI. Brooklyn Hoffert and Maggie Staub also recorded one hit apiece while Alana Hoffert had an RBI.

To start game two, the Vikings had a special teammate throw out the ceremonial first pitch. Senior Alleigha Gurden took the mound for the first time since last season. In July 2018, Gurden was in a car accident that nearly took her life. She’s been rehabbing ever since and learning to do everyday tasks all over again. She’s made an incredible recovery over the last ten months and continues to reach the goals set for herself!

After the ceremonial pitch, Lundquist took the mound again for game two. She gave up two runs on seven hits while striking out nine. At the plate, Alana Hoffert had three hits and an RBI, while Shelby Townsend had a hit and two RBI’s. Fosmore and Lundquist each recorded a hit and RBI while Eastman and Brooklyn Hoffert had a hit apiece.

The Vikings take on Kalkaska on Thursday. Varsity plays away, JV will be home.